The Thursday Think Tanks are semi-random thoughts that may not necessarily fall directly into the category of finances, but I still feel are worth sharing. Read at your own risk!

I’m a big animation fan. I love all animated films, whether 2D or 3D, and there was a time when being an Animator was all I wanted to do.

For me it started young. I loved traditionally animated Disney films, and while I can draw a decent comic strip or two, I didn’t have the chops to be a Disney Animator by any stretch. So I collected memorabilia, went to Disneyland as often as I could, and drew little comic strips on the side to get me by. Here is an example:

I actually got pretty good at in, and wound up getting a low-tier syndication contract offered to me, but that’s a story for another time…

When “Toy Story” came out, I knew I had found the solution to my problem. I didn’t have to draw perfectly, as long as I could understand animation principals as they applied to things like timing and movement, I could do this awesome thing that was sweeping the world by storm called, “Computer Animation!”

So I enrolled in night classes at an art school, and 3ish years later I was hired into my first gig as a professional Animator in games at Microsoft.

One of the perks of working for Microsoft back then was that I got to choose one festival a year to attend. For animation there are several, but I figured I’d shoot for the stars and ask if they’d pay for me to attend the Annecy Film Festival in Annecy, France. This yearly festival takes place in a sleepy little French town that snuggles up to the Alps. It’s a stunning location, and one that isn’t cheap to get to or attend.

To my utter shock and surprise, they agreed!

I didn’t have any other animators in my group, and so I didn’t really have anyone to go with. I also didn’t have much experience traveling abroad, other than a short trip or two to the UK. Both of these bits of information came into play almost immediately.

Back then we had a couple of travel websites, but this was around 2005 if I remember correctly, and they weren’t as awesome as they are now. So I had to sort of blindly pick a hotel. The Annecy Festival is also incredibly popular, so most of the hotels in the town were already booked solid by the time I got my approval. I booked a Best Western, which I felt like was pretty safe bet, grabbed a plane ticket, and was ready to go!

In the days leading up to my trip, I got LOTS of advice from people that totally freaked me out. Things like:

So needless to say, I was worried about the trip already. I don’t remember much about the flight or the train ride from Lyon to Annecy, but what I do remember is that I got out of the station, and stood in line at the cab stand. I used a book (iPhones hadn’t even been invented yet) to utter, “S’il vous plaît, emmenez-moi à l’hôtel,” which I believe roughly translates to, “Take me to the hotel please.” I then showed the driver a print out of my hotel address and picture. He smiled and said with a French accent, “Sure. No problem!”

Awesome! Here were all of these people telling me how poorly I was going to be treated, and the first French person I had any kind of interaction with at all seemed incredibly nice and helpful.

We got in the cab, and he took me on a short 30 minute ride to my hotel. The problem?

My hotel was literally 2 minutes from the train station. I didn’t find this out until much later, but I checked while writing this post, and it’s exactly 2 minutes by car. He had driven me out to the outskirts of town, up and down several streets, twisted me all around, and then dumped me back at my hotel. And charged me accordingly!

As I said, I wasn’t aware of this until days later, so at the time he was still “Friendly French Cab Driver” as far as I was concerned.

My “safe bet” Best Western was anything but. I actually took a photo on a DSLR camera and have kept it all these years: 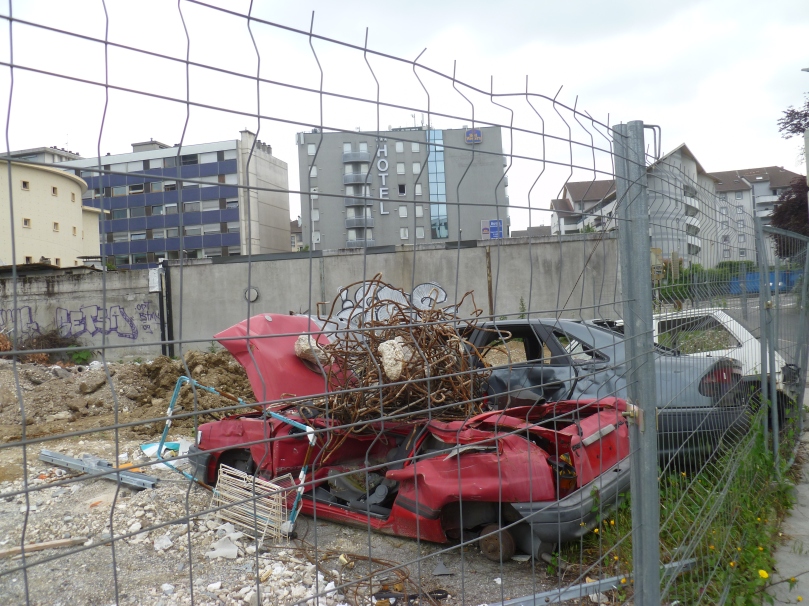 That’s not Beirut. That’s my hotel in the background there, notice the Best Western sign.

The hotel itself was clean enough, but it was as no-frills as it gets. The walls were void of any photos, my view was of that stark flat wall of the building screen left, the TV only got French channels, and there were no such things as iPads back then, so at night I literally sat and stared at the walls or at the French television shows I couldn’t understand. I felt like Tom Hanks in his first night in the hotel in “Big.”

The festival itself was a blast, and I met many great talents there. Overall I felt that the people of the town were quite warm, and didn’t hate Americans nearly as much as I had been led to believe. A couple of notable exceptions however:

The Dessert Waiter – My first full day in Annecy, I needed to get some food, so I went to a restaraunt for dinner. Even back then I had enough common sense to look for busy restaraunts when in unfamiliar places, because it usually means good food. I sat down, and the waiter came over to greet me. The moment my American accent was heard, his facial expression soured. He said nothing, and just shoved a menu under my beak.

Here’s the problem: The menu was in French. I had my translation book, but there was no way I was going to have enough time to meticulously decipher that sucker. I tried to be as polite as possible and ask him if he spoke any English. I looked up words like “recommendation,” and “suggestion,” but he was as cold as the snow on the peaks of those beautiful French Alps.

Finally I just said a little prayer and blindly pointed to an item on the menu. He smiled, much as the cab driver had smiled, and gave me the universal “Okay!” finger gesture. He was gone for a short while, and then returned with my food.

It was an ice-cream and brownie sunday. Not wanting to give him any kind of satisfaction at all, I ate it with an equally large smile on my face as though I knew exactly what I had been doing the whole time.

When my meal was over, he presented me with the check, and in very clear English said, “If you come back tomorrow, I will help you order some real food.”

I came back the next day, and he did just that. The remainder of the trip I ate at that restaurant at least once a day, and tipped well each time. I never got his name, but I’ve always appreciated him helping me after my initial hazing was complete.

The Back Alley Men – While the waiter story ended on a good note, this one good have ended very badly…

Being a few days into the festival now, I was fully aware that the cab driver had screwed me over. The thing that tipped me off was the first day when I walked from my hotel to the festival, and after only about 7 minutes of walking, I walked directly past the train station that he had picked me up from.

I was over that by now, and had a pretty good sense of direction in the town, so after one of the talks I attended had wrapped, I decided to walk back via a new route and explore a bit.

Annecy has beautiful little side streets, some with ornate fountains and building sculptures. I took one of these side streets, and as I attempted to move to the next block, I took what looked like another even smaller side street but was actually an alley.

I was walking between cars and about halfway down the alley when two men approached. One of them said something to me in French, and I said, “I’m sorry, I don’t speak French.”

He gave me a warm smile (see a pattern forming?) and said, “Oh! You are American! We love Americans!”

My Spidey-Sense wasn’t just tingling, it was rattling my eyeballs out of my head. Despite both of these men smiling and telling me they loved me, I wasn’t feeling it. Something was up.

“Where are you staying?” he asked as he and his silent friend continued to walk towards me, “We should party together!”

As he said this, his friend began to casually break off and flank me. He was slowly moving around to my side, and as a result, I had stopped walking forward and was slowly backing up.

“Stay and talk to us! We like everything about America!”

I started to realize that this tiny little alley next to a quiet little side street had nobody anywhere near by other than the 3 of us. I might have been able to scream loud enough to get someone’s attention, but I might not.

I just turned and ran as fast as I could back in the direction of the festival. It only took a block or two to hit a crowd of people, and when I looked back, the two guys had not followed and were nowhere to be found.

The rest of the trip I made sure to have people around me at all times.

Let me be clear again: The people of Annecy and the Festival itself were both lovely. I had a great time overall, saw some fantastic talks on Animation, and still regard it as one of my more memorable life experiences.

I just doubt that version would have made for an exciting blog post.

If you are into animation at all, I highly recommend it. If you are not into animation as much as I am, you should still consider visiting Annecy. Technology has improved so much now that there are a billion apps that will help you pick the right hotel, and help translate if needed. 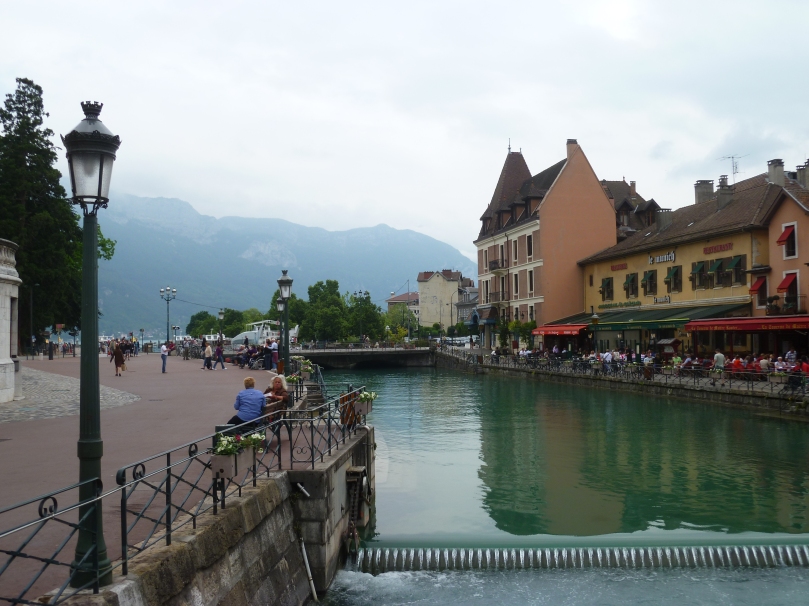 I’m not sure of an app that will keep you from getting mugged in a back alley though, so make sure you pack running shoes!

Got your own crazy travel story? Ever been to Annecy? Love animation as much as I do? Let me know in the comments below!

If you are enjoying what you read, please help me out and share it!

This site uses Akismet to reduce spam. Learn how your comment data is processed.

If you like what you’ve been reading on this blog and you feel like you’re in a position where you’d like to leave Dave a tip via PayPal, click the image above. All proceeds go towards the purchase of new shovels and a credit card shredder!

If you like what you're reading, please let others know. One of my primary goals with this blog is to give others who might be in a similar situation some comfort in knowing they aren't alone.

The absolute best way to make this happen is to have fine folks like you share the link to this blog. So please do so, and I'll keep drawing little goofy drawings to go at the top of every post.